Michael Perry
www.sneezingcow.com[/one_third]
[two_third_last]On the road from Boston, Massachusetts comes moody songstress Meg Hutchinson. She attributes having grown up in the Berkshires, mountains, woods and ponds along with songwriters she listened to like Greg Brown and Joni Mitchell as some of her main influences. After graduating from college with a degree in creative writing, she quit her longtime job as a lettuce farmer and moved to Boston performing at pubs,, coffeehouses and subway train stations and began competing in songwriting competitions around the country. Most notably where she won awards at Merlefest in North Carolina and the Telluride Troubadour Songwriter’s Showcase in Colorado.[/two_third_last]

Backstage Monologue
In this episode’s monologue – delivered from the backstage dressing room with the one lonely little lightbulb burnin’ – Mike talks about how he both fights and celebrates light pollution on the back forty.

[two_third_last]With their own special blend of progressive and traditional music, the sons of bluegrass legend Del McCoury, Ronnie McCoury on mandolin and Rob McCoury on banjo continue their father’s great work. Joined in concert by fiddler Jason Carter and bassist Alan Bartram, the group continues to tour and astound delivering their often times hopped up sounds. Throw in some Keller Williams into this unlikely mash-up of sounds, with his guitar mastery and easy-going Americana style, and what you have is an outstanding night of music under the stars on the Big Top stage![/two_third_last]

Backstage Monologue
In this episode’s monologue – delivered from the backstage dressing room with the one lonely little lightbulb burnin’ – Mike talks about how he both fights and celebrates light pollution on the back forty. 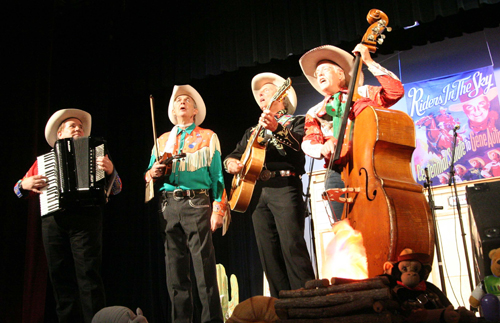 Links
Riders In The Sky
www.ridersinthesky.com

Michael Perry
www.sneezingcow.com[/one_third]
[two_third_last]Riders in the Sky is an American Western music and comedy group which began performing in 1977. Their style also appeals to children, and they are sometimes considered a children’s band. They have won two Grammy Awards and have written and performed music for major motion pictures, including “Woody’s Roundup” from Toy Story 2 and Pixar’s short film, For the Birds. In their first 30-plus years, Riders in the Sky have performed in over 6200 live performances, almost 300 national television appearances, over 200 public radio shows, 700 Grand Ole Opry appearances, three television series (including a 1991–92 CBS Saturday morning show), an appearance on an episode of “Duck Dodgers” on Cartoon Network and more than 30 albums. The group also wrote and appeared in numerous Christmas specials on TNN and CMT in the 1990s. They are based in Nashville, Tennessee.[/two_third_last]

Backstage Monologue
In this episode’s monologue – delivered from the backstage dressing room with the one lonely little lightbulb burnin’ – Mike talks about his feelings regarding a certain black cat.

[two_third_last]Jesse Winchester is an American musician and songwriter who was born and raised in the southern United States. To avoid the Vietnam War draft he moved to Canada in 1967, which is where and when he began his career as a solo artist. His highest charting recordings were of his own tunes, “Yankee Lady” in 1970 and “Say What” in 1981. Winchester is probably most well know as a songwriter, with his works being recorded by many notable artists, including Patti Page, Elvis Costello, Jimmy Buffett, Joan Baez, Anne Murray, Reba McEntire, The Everly Brothers and EmmyLou Harris.[/two_third_last]

Backstage Monologue
In this episode’s monologue – delivered from the backstage dressing room with the one lonely little lightbulb burnin’ – Mike talks about his favorite New Year ever, and why Grandma’s cookies taste like cigarettes.